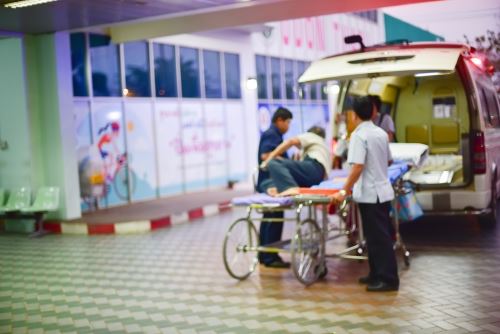 A tenth patient from the Rehabilitation Center at Hollywood Hills died on Wednesday, September 20.

The facility operated without air conditioning for days after Hurricane Irma knocked out some of its power, and rescue officials noted that the rooms had become stiflingly hot during that time. Authorities launched a criminal investigation in order to determine who, if anyone, is responsible for the loss of these lives.

While officials are busy investigating this tragedy, it’s hard to avoid the question staring everyone in the face – why was this an issue to begin with? Florida reaches dangerously hot temperatures every summer, and senior citizens are especially susceptible to heat-related health issues. There should be some system or regulations in place to ensure that people in nursing homes aren’t left to bake in a heat wave when the facility’s power fails.

In fact, Florida lawmakers attempted to create exactly that more than a decade ago. In the wake of the devastating 2005 hurricane season, state legislators passed several new laws designed to protect residents in the event of another natural disaster. Among the proposed bills was one that would require some nursing homes to have generators in place to ensure that their air conditioning units would remain functional while the power was out. These facilities would also be set up to accept patients evacuated from other nursing homes.

In its initial form, this bill required all nursing homes to have these generators in place, but lawmakers eventually compromised in an attempt to pick up the necessary votes. Part of the compromise included $57 million dollars to reimburse half of the cost for some of the nursing homes that agreed to participate in the initiative.

After passing almost unanimously through the Florida House of Representatives, the proposed bill died in the Florida Senate.

"The Legislature is horrible when it comes to everything that doesn't have a tragedy behind it," said then-Rep. Dan Gelber, who sponsored the legislation in the House. "They have one now… Now that there are dead residents in an unthinkable tragedy, they'll probably solve the problem."

According to Gelber, a significant part of the issue legislators faced was the fact that the nursing home industry was opposed to any sort of mandate.

"We were going against an industry — and legislators — who don't want to spend money if they are not addressing a crisis," he said. "It's always hard to get elected officials to care about a crisis if it's not in a headline."

Pressure to reintroduce a similarly crafted bill is likely to build now that the Rehabilitation Center at Hollywood Hills has become a national story.

Existing state health care administrative rules require nursing homes to ensure that a generator is in place in order to keep life-saving equipment like breathing machines, nursing call buttons, and fire alarms active if the facility loses power. There is no such rule in place for air conditioners.

Walter G. "Skip" Campbell, the chair of the Florida Senate Children, Families and Elder Affairs Committee back in 2006, recalled the resistance the long-term care industry gave lawmakers while they attempted to find a compromise that would keep nursing home residents safe and cool during a power outage.

Officials looked at alternatives to generators first. Back in 2006, nursing home administrators met at the University of South Florida in order to discuss what they learned following the devastation caused by Hurricane Wilma the year before and plan for the future. A report published after the summit stated that the nursing home industry needed to set up a power grid prioritizing nursing homes and critical care facilities. However, Florida Power & Light (FPL) and other utility companies pushed back.

"It's a slippery slope for them," Skip Gregory, a longtime administrator at AHCA said in an interview. "Their argument was if it went to nursing homes, then [assisted living facilities] would come back and say 'what about us?' My conversations with them were always 'if we do it for them, we have to do it for everybody' — and then have no priority."

Officials have noted the importance of air conditioning units for at least 40 years. Back in 1976, five residents of a Florida nursing home died following the sudden onset of fevers between 103 and 106.4 degrees F when the facility’s air conditioning unit was shut down for about five days for repairs. Another 16 residents registered temperatures greater than 100.6 degrees F. No viral or bacterial pathogens were detected, leading officials to attribute the fevers to the dangerously high temperatures in the nursing home.

“The episode points up the need for prompt recognition and intervention when there is the potential for heat stress in elderly and chronically ill patients,” the researchers wrote. “Buildings housing such patients must be designed so that alternative ventilation can be provided when the central air-conditioning system fails.”

These people could have been saved if not for the legislative resistance in the Florida Senate and cost-cutting measures on the side of the Rehabilitation Center at Hollywood Hills. While financial responsibility is important to keep any business afloat, it cannot come at the cost of human lives. Hurricanes will continue to threaten extended statewide power outages, and summers in Florida will remain hot. Neither of these things will change, but creating a safety net to ensure that some of the most vulnerable citizens in our state remain safe even in the face of a disaster is entirely within our control. The legislators have their headlines – it’s time to make a change.