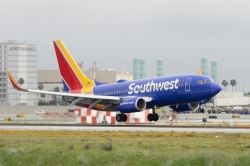 On Tuesday April 17, an engine on Southwest Airlines Flight 1380 exploded unexpectedly in mid-air, killing one passenger and injuring at least seven others. According to officials, the force of the explosion caused severe damage to the Boeing 737’s engine and fuselage, and sent metal fragments into a section of the jet where passengers sit. The plane, bound for Dallas Love Field from LaGuardia Airport in New York, was forced to make an emergency landing in Philadelphia. The passenger death is the first in-flight fatality on a U.S. commercial airliner since 2009.

As described by some of the more than 140 passengers and crew members aboard, the incident was a frightening and chaotic experience, as the force of the explosion broke a window and ripped open a hole in the side of the plane, causing the cabin to de-pressurize. Passengers and officials report that the fatally injured victim was partially sucked out of the jet and had to be pulled in by others.

Given the tragic nature of the death, regulators from the National Transportation Safety Board (NTSB), Federal Aviation Administration (FAA), and other agencies have been meticulously investigating what went wrong. Although investigations are still in their early stages, the NTSB has stated it found signs of metal fatigue on a section of the engine where a fan blade was missing, and that such areas of weakness can be caused by repeated bending. Following the NTSB’s announcement, officials from Southwest said the company will conduct additional ultrasound inspections of all aircraft engines in its fleet.

Because federal regulators are tasked with determining an underlying cause of the engine explosion – as well as whether it could and should have been prevented – their preliminary findings are shining a spotlight on the engines which powered the 737. Those engines, CFM56-7B engines, are produced by CFM International Inc., a joint venture between Safran SA of France and General Electric Co. The company is the only supplier of engines for 737-700 jetliners.

Although engine failures have not caused a catastrophic commercial airline crash in decades, they still pose significant and widespread threats to passenger safety, especially when all 737 engines are made by the same company. As the NTSB reports, it has previously investigated an engine failure involving the same type of engine on a Southwest plane in 2016, as well as an explosion involving a grounded Boeing 767 the same year.

As investigations continue, determining what went wrong will be critical not only to the public and thousands of people who travel on U.S. commercial airliners every day, but also the victims and families affected by this tragedy. Should it be discovered that some party failed to uphold its legal duty of taking reasonable steps to ensure safety – whether that means producing a defective engine, failing to identify or fix a potential issue, or failing to properly maintain jets, among other potential issues – victims may have the right to seek accountability, justice, and compensation for their losses in the civil justice system.

As a personal injury firm with a 60-year tradition of fighting for the injured and the wronged, our team at Schlesinger Law Offices, P.A. is hopeful investigators can pinpoint a reason behind the engine explosion and ensuing tragedy. Such findings would help ensure such issues can be immediately addressed for the benefit of public safety, and create accountability for any party that failed to ensure the safety of passengers.

Our Fort Lauderdale personal injury lawyers have extensive experience representing victims of devastating and preventable accidents, including those involving transportation accidents and defective products. If you have questions about an airline or aviation accident, product liability claim, or any other preventable injury caused by negligence, we’re here to help. Contact us for a free consultation.