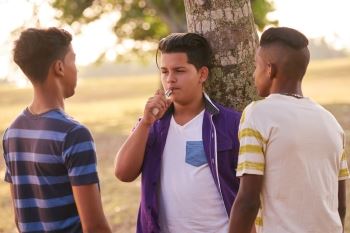 What Is an Electronic Cigarette?

Electronic cigarettes, or “e-cigarettes,” are battery-powered devices that are frequently marketed as smoking cessation tools. These vaporizers utilize liquid cartridges that contain nicotine, glycerin, flavorings, and various carcinogenic chemicals. To use this product, a user first needs to place their lips on the mouthpiece. A sensor in the device triggers the heating process that vaporizes the liquid into a breathable aerosol. Unlike traditional cigarettes, this vapor can be directly absorbed into a user’s body through the mouth, nose, and lungs.

Despite clever marketing tactics, the Food and Drug Administration’s (FDA) Center for Drug Evaluation and Research does not accept e-cigarettes as a safe or effective way to quit smoking. In fact, research suggests that using e-cigarettes can even serve as a gateway to other addictions.

The Dangers of “Vaping”

In 2015, the Centers for Disease Control and Prevention (CDC) released a report outlining the growing popularity of e-cigarettes in the United States. According to this study, roughly 12 million Americans were using these cigarette substitutes on a regular basis back in 2014. Since then, “vaping” has become an incredibly popular form of tobacco use among teenagers and young adults.

The volatile chemicals, heavy metals, and organic compounds typically found in e-cigarette cartridges can lead to the following medical conditions:

The Link Between Vaping & Seizures

On April 3, 2019, the FDA issued a special announcement detailing the alleged link between e-cigarettes and seizures. In years spanning 2010 and 2019, 35 youth and young adult users reported suffering seizures after using e-cigarettes. The FDA suspects that this is likely only a small percentage of the actual number of victims since the reports were submitted on a voluntary basis. The agency is hoping that more people will complete reports now that the potential link has been identified.

Seizures are a consequence of abnormal and excessive electrical activity in the brain. While most people associate seizures with convulsions, many victims experience seizure symptoms without shaking uncontrollably. A seizure can last mere seconds or continue up to 15 minutes.

Nicotine poisoning can lead to seizures, convulsions, brain injuries, and even death. However, people usually only suffer these side effects if they accidentally or intentionally consume vape liquid. If you’re vaping, it’s critical that you seek medical attention if you suffer any of the warning symptoms commonly associated with seizures, including: nausea, vertigo, intense fear or anxiety, and sudden visual problems.

Aside from convulsions, other common seizure symptoms include:

A seizure necessitates prompt medical attention, so it’s vital that you call 911 immediately if you believe a friend or relative requires emergency assistance. You can also contact poison control for advice at (811) 222-1222.

The FDA is currently researching the purported link between e-cigarettes and seizures. However, there are specific inconsistencies in the initial 35 cases that are complicating their investigation. For example, both first-time and experienced e-cigarette users have submitted reports. Also, some of the victims were diagnosed with seizures in the past due to unrelated medical complications. Others confirmed or hinted that they were taking other illegal substances, such as cannabis or amphetamines, while they were vaping. At present, the agency can’t even pinpoint if the seizures are related to a specific e-cigarette brand or vape liquid because the initial reports are incomplete. For this reason, the FDA is relying on the public to send more detailed reports.

If you or someone you love experienced seizure symptoms while vaping or e-cigarettes like JUUL, you may be able to pursue damages by filing a product liability claim. At Schlesinger Law Offices, P.A., our Fort Lauderdale product liability attorneys are committed to holding negligent companies responsible for their defective products. Over the years, our firm has handled a variety of complex product liability cases and recovered record-setting verdicts on behalf of our clients. With over 60 years of collective legal experience, you can trust that our firm has the skills and resources to effectively guide you through each phase of your unique legal journey. By meticulously investigating your case and calculating your injury-related expenses, we can customize a litigation strategy that reflects your legal objectives and aims to maximize your claim.