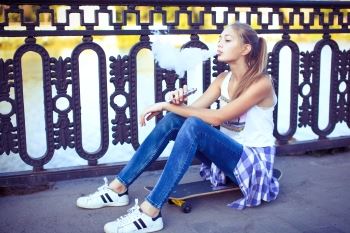 E-cigarette use among teenagers has become an epidemic in the United States; however, new research indicates that many young people are unaware of the amount of addictive nicotine they’re consuming.

The study consisted of 517 young participants, between the ages of 12 and 21. They were tasked to complete questionnaires regarding their vaping habits, as well as their use of cannabis and traditional cigarettes. Researches compared the results of the survey to the urine test results.

Among young vapers,four of every 10 people who claimed they consumed non-nicotine products tested positive for nicotine markers in their urine. Many of them didn’t know the highly popular JUUL vaping pods they used actually contained the highest nicotine concentrations available.

According to JUUL, a single pod contains as much nicotine as a pack of 20 traditional cigarettes. The company is the top-selling e-cigarette manufacturer in the country.

Experts said that this study could mean a significant increase in lifelong nicotine addictions among young people, especially those who believe vaping is less hazardous in comparison to traditional smoking. Most teenagers do not have full knowledge of an e-cigarette’s actual contents.

E-cigarettes can deliver more nicotine with every puff. By contrast, traditional cigarettes burn down between puffs, thus delivering less nicotine.

As the research team noted, approximately one in five high school students have vaped at least once over the past month. Between 2017 and 2018, vaping among teens rose by 78 percent in a span of one year.

Has Your Child Become Addicted to E-Cigarettes?

If your child suffers from a nicotine addiction due to the use of e-cigarette brands like JUUL, our legal team at Schlesinger Law Offices, P.A. can hold these manufacturers liable for their actions.Big Tobacco companies target teens with false advertisements and dishonest business practices for their hazardous products. Not only will we fight these companies for the benefit of your child, but for teenagers throughout the country.

To discuss your potential JUUL lawsuit, contact us and schedule a free consultation today.