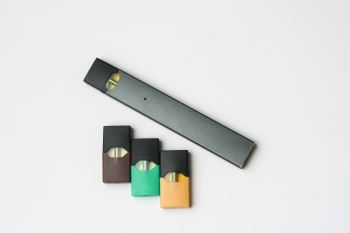 The popular e-cigarette company, Juul Labs, has received significant backlash for their role in the recent teen vaping epidemic. Teenagers across the United States are using dangerous e-cigarettes, or “vaping,” at alarming rates, which has led to serious health problems and addiction issues. Worst of all, the company behind the craze, Juul, has been accused of intentionally marketing to teenagers who are especially susceptible to the hazardous effects of vaping products. As a result, the CEO of Juul, Kevin Burns, recently released a statement apologizing to parents whose children have become addicted to their e-cigarettes.

The statement was recorded in a new documentary, “Vaporized: America’s E-Cigarette Addiction,” hosted by Carl Quintanilla of CNBC. In the interview, Quintanilla asked Burns what he’d like to say to the parents of children who are coping with addiction to Juul e-cigs. He responded:

“First of all, I’d tell them that I’m sorry that their child’s using the product. It’s not intended for them. I hope there was nothing that we did that made it appealing to them. As a parent of a 16-year-old, I’m sorry for them, and I have empathy for them, in terms of what the challenges they’re going through.”

Burns has been with Juul since 2017, during which time the company has tried to retract the damaging marketing strategies that so intrigued young vapers. The company previously launched social media advertising campaigns that specifically targeted younger users, and they sold fruity, fruity flavors like crème and mango that appealed to a younger audience.

To read more about Kevin Burns’ apology, read the full article at usatoday.com.

Since public complaints have grown, Juul has stopped selling these fruity flavored pods and have also shut down their social media accounts. However, despite these efforts, countless teenagers remain addicted to harmful Juul e-cigarettes.

According to several studies, e-cigarette use is addictive and damaging, despite originally reaching the public eye as a safer alternative to smoking. In fact, one Juul e-cigarette cartridge contains as much nicotine as an entire packet of cigarettes. And, the use of e-cigarettes is particularly dangerous for younger users. The chemicals in Juul pods can damage young, developing minds and may result in brain damage, lung problems, and seizure disorders.

Injured By Juul? We Can Help!

If your child was harmed by Juul e-cigarettes, our firm is prepared to help you fight for justice and compensation. Juul marketed their products to teens and failed to warn consumers of the dangerous effects of their e-cigarette pods and products. As a result, countless teens are now addicted to nicotine and suffer various other health effects. If you think you have a case, our firm wants to hear from you.