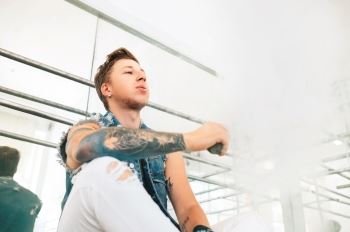 The Epidemic of Teen Vaping

E-cigarettes were first introduced to the American tobacco product landscape in 2007 and quickly gained popularity as a trendy smoking cessation tool. However, scientific studies have since refuted the tobacco industry’s early marketing campaigns that advertised these devices as safe and non-addictive cigarette alternatives. To protect their profit margins, negligent tobacco companies – including JUUL and Blu – started rebranding and remarketing their products to appeal to a younger, more impressionable consumer base: our children.

Today, e-cigarettes are the preferred tobacco product for adolescent users; in fact, according to the 2018 National Youth Tobacco Survey, over 2.1 million middle and high school students were e-cigarette users in 2017, a statistic that has likely increased in the last two years. This alarming study prompted the FDA to “crack down on retail sales of e-cigarettes to minors” by conducting 978,290 retail inspections, initiating over 18,500 civil money penalty cases, and issuing 77,1780 warning letters to tobacco companies and retailers who are guilty of intentionally targeting children and young adults.

While this method aggresses the greater problem, it doesn’t provide an immediate solution for minors suffering from addiction and peer pressure on a daily basis. Fortunately, Florida community leaders are adopting an aggressive stance against e-cigarettes.

To battle this epidemic, Florida lawmakers and community leaders are organizing statewide awareness campaigns to educate parents and teens about the health risks associated with e-cigarettes. Cindy Krischer Goodman, a Contact Reporter for the South Florida Sun Sentinel, discussed this matter in her article, “Vape pens are hooking more and more teens. And school leaders are fighting the epidemic.” According to Goodman, the “health risks are becoming increasingly more extensive and include not only nicotine addiction, but also a higher chance for lung cancer, asthma, seizures, anxiety, and harm to the developing adolescent brain.” Plus, she adds, evidence suggests that vaping is a perfect example of the domino fallacy: young people who use vape pens may turn to regular cigarettes in the future, essentially creating a generation of minors at risk of nicotine dependence.

To cut off the slippery slope, The Florida Department of Health’s Bureau of Tobacco Free Florida launched a new campaign, E-Epidemic: Vaping and Youth, to “give parents and educators the latest facts on youth vaping and the highly addictive properties of e-cigarettes.” Laura Corbin, bureau chief of Tobacco Free Florida, explained to Goodman that many adolescents believe e-cigarette vapor is nothing more than “harmless water vapor.” They don’t understand – or believe – that a single JUUL pod contains as much nicotine as a pack of standard cigarettes.

Broward County Schools are also distributing flyers entitled, “7 Things E-Cigarette/Vape Companies Don’t Want You to Know” to help parents understand that vape pens are not safe for adolescent users. The school is also contacting parents and guardians to caution them about the high levels of nicotine in e-cigarettes.

In her article, Cindy Krischer Goodman comments on the dedicated efforts our firm has made to help curb the teen vaping trend. On April 15, 2019, Schlesinger Law Offices, P.A. filed a federal class action lawsuit against JUUL Labs Inc. and Altria Group, Inc. for violating federal racketeering laws by exploiting adolescent users and underplaying the health risks associated with their products. This complaint was filed on behalf of a 15-year-old Sarasota girl who became addicted to nicotine and suffered seizures after using JUUL products.

Goodman interviewed our founding attorney, Scott P. Schlesinger, who said, “[JUUL] have perfected the model tobacco used…to make smoking look cool, and then get them hooked. We believe the addictive properties are intentionally designed into the device. The public health interest is that we are creating a new generation of nicotine addicts.”