On the morning of April 10, 2016, James Schnurr, the Chief Accountant of the U.S. Securities and Exchange Commission (SEC), was severely injured while cycling across a promenade in Jonathan’s Landing, a private golf club community in southeastern Florida. The neighborhoods in this community are linked by an intricate promenade system that is specifically designed to facilitate biking, walking, and golf carting.

However, the intersection at Captain Kirle Drive is incredibly dangerous for residents due to the unmarked presence of two stanchions. When Schnurr arrived at this intersection, he struck one of the stanchions and was subsequently ejected from his bike. He suffered permanent and substantial bodily harm because of this incident and was forced to retire from his job in November 2016.

As of June 2019, it's reported that Schnurr has now been rendered paralyzed as a result of this tragic accident – even after receiving appropriate medical care. Although his wife Christine was quick to call for emergency services at the scene, Schnurr is now a permanent quadriplegic and will experience a lifetime of disability. 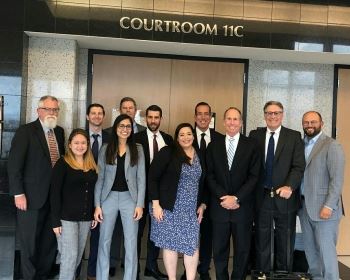 HOAs have a legal obligation to provide a reasonably safe environment for community residents and guests. Schlesinger Law Offices, P.A. represented James Schnurr and his wife in their lawsuit against J.L. Property Owners Association, Inc., the community’s homeowners’ association. In the complaint, we explained that the HOA owed a duty to its residents, and “knew or should have known that the design, construction, maintenance, and/or management of the subject promenade and stanchions involved an unreasonable risk of harm to cyclists.”

We also proved that J.L. Property Owners Association, Inc. breached its duties by:

The jury agreed that J.L. Property Owners Association, Inc. didn’t take proper care in warning its residents – including our client – about the stanchions. They awarded James Schnurr $41 million in damages for medical, nursing, and rehabilitative care ($16,800,000), lost wages ($750,000), loss of earning potential ($3,500,000), on top of various non-economic damages ($15,000,000). Christine Schnurr was also awarded an additional $5 million for the loss of her husband’s comfort, society, and attention.

Although we are pleased that the jury pursued a fair judgment in this case, Schnurr will continue to grapple with medical issues related to his paralysis, making the $41 million judgment critical to his long-term wellbeing and financial prospects. As Attorney Schlesinger shared in a recent article, "Prevailing in these kinds of cases, you can’t use the word ‘win'. No one can turn back the clock. That would be a win.”

Have You Been Injured in a Bicycle Accident? Schedule a Consultation Today

The National Highway Transportation Safety Administration consistently ranks Florida as one of the most dangerous states for cyclists. If you’ve sustained a serious injury in a bicycle accident, contact the Fort Lauderdale bicycle attorneys at Schlesinger Law Offices, P.A. today. Our trial-tested legal team has been representing the rights and interests of cyclists for over 60 years. We can handle every aspect of your case and help you secure a favorable case outcome that maximizes your claim and facilitates your ongoing recovery process.

A single act of negligence can change an innocent person’s life forever. You shouldn’t have to worry about affording your medical bills or questioning if your lost wages can be recovered. Contact Schlesinger Law Offices, P.A. at (954) 467-8800 to schedule a consultation today.