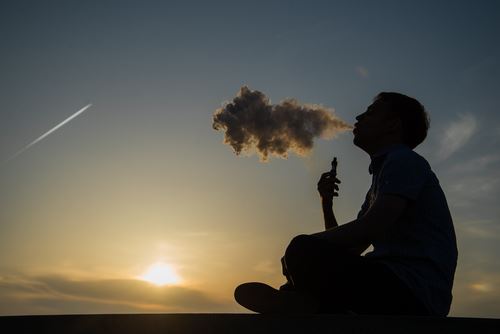 The relative “safety” of e-cigarettes has been championed by the product’s manufacturers and users since their introduction to the market. Recently, it has been revealed the e-cigarettes are just as unhealthy and addictive as traditional cigarettes. JUUL, a popular e-cigarette brand, exemplifies another similarity between traditional smoking and vaping: The societal pressure among teens to smoke.

The “safe” perception of JUUL and the brand’s variety of flavors often are blamed for the rise in teen use, but peer influence is equally significant.

The Truth Initiative reported that young people aged 15-17 are 16 times more likely to choose JUUL brand vaping devices than individuals in the 25-34 age group, with 47% of young JUUL users stating they first tried the e-cigarettes because their friends used them.

Teen e-cigarette use in general increased by 78% in 2018, and JUUL occupies 75% of that market. There was an eightfold increase in high schoolers aged 15-17 who tried JUUL in October 2018 (compared to the rate in August 2017), and there is evidence of an increase in use that corresponds to the start of the school year.

As JUUL’s overwhelming popularity among young people has become more apparent, the vape company has continually denied liability and claimed that they do not market to young people. However, the focus on flavors in their advertising, along with the company’s social media presence, is evidence to the contrary. In addition, teen brains are especially susceptible to the highly addictive formula of JUUL pods.

The statistics alone demonstrate that JUUL’s popularity with teens is more than a mere coincidence — 56% of e-cigarette users says they were under the age of 18 when they first tried vaping. The exponential growth is expected to continue, as JUUL use is ingrained in the social fabric of today’s teenagers. JUUL is responsible for starting a phenomenon that will subject young users to years of struggling with addiction.

Reach out to Schlesinger Law Offices, P.A. if your child has been a victim of JUUL’s negligent targeting of young consumers. We have represented many families in cases against e-cigarette companies. Contact us online or call (954) 467-8800 to discuss your circumstances in a free consultation.